Statue of Liberty in New York 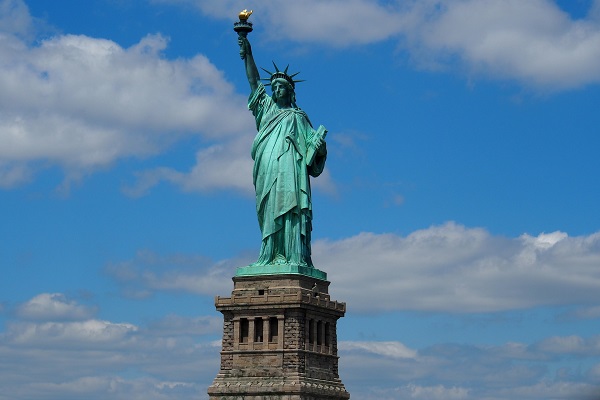 “The Statue of Liberty Enlightening the World” was a gift of friendship from the people of France to the United States and is recognized as a universal symbol of freedom and democracy. The Statue of Liberty was dedicated on October 28, 1886. It was designated as a National Monument in 1924. Employees of the National Park Service have been caring for the colossal copper statue since 1933.

Visiting the Statue of Liberty on Liberty Island and the Immigration Museum on Ellis Island is a wonderful experience and to get the most out of it, realize that visiting can take most of a day.

The Statue of Liberty is made of copper 3/32 in. (2.4 millimeters) thick, the same as two U.S. pennies put together.

Why is the Statue green? The Statue's copper has naturally oxidized to form its familiar "patina" green coating. This patina is as thick, in many places, as the copper behind it and is protecting the copper from naturally wearing away.

How tall is the Statue of Liberty? The Statue is 305ft. 1in. from the ground to the tip of the flame. It is the equivalent height of a 22-story building. In 1886, it was the tallest structure in New York.

Classical images of Liberty have usually been represented by a woman. The Statue of Liberty's face is said to be modeled after the sculptor's mother.